After Soichiro Honda, director of motorbike manufacturer Honda Corp, had had an immense success with his C-series engines and mopeds, he wanted to develop something new. Honda wanted to develop something that could also drive through the narrowest alleys of Tokyo. This resulted in the Honda Monkey. The problem with the Monkey, however, was that only one person could be transported.

So a two-wheeler had to be developed that was small and compact, but also smooth enough to get along with the traffic and there had to be room for two people.

To meet this, Honda thought it would be handy to make the Dax with 50cc, but also 70cc available. The development of the Dax began at the end of 1967 and a prototype was presented in 1968.

In 1969, the Dax was production-ready. This production version had a slightly larger headlight than the prototype, a different exhaust and the front fork was now standing. The production version also had a more common swing arm with two shock absorbers and a slightly different saddle. Interestingly, the front fork was detachable, so that the Dax could easily be transported, for example in the back of a car. 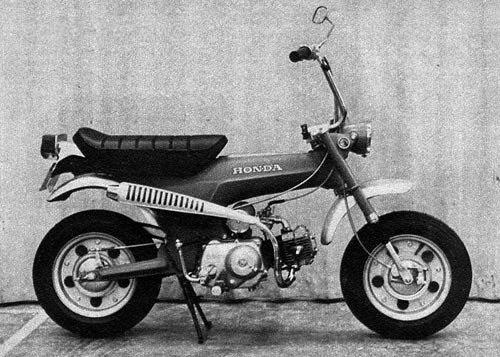 Questions? Let us know and we will be pleased to help you.